Every day, some terrible discouraging development assaults our senses.  It can be overwhelming.

It helps us get a clue on what people in the Middle East and North Africa have faced for decades. Layered crises, one blending with another.

This brings to mind my Mother’s favorite Bible verse:

“Do not be anxious about anything, but in everything by prayer and supplication with thanksgiving let your requests be made known to God.

And the peace of God, which surpasses all understanding, will guard your hearts and your minds in Christ Jesus” (Phil. 4:6-7).

Living in peace in the midst of turmoil is not sticking our ostrich head in the sand, it’s not whistling past the graveyard, nor is it being a clueless Pollyanna.

SAT-7 blesses Middle Eastern viewers with the peace and hope of the God of the Bible.

Living in peace during crises is a blessing of God.

Lessons From Jonah About Racism--SAT-7 in the Middle East

In modern terms, the Old Testament Prophet Jonah would be called a racist.

He hated the people of Nineveh, so he refused to follow God’s command to preach to them and ran from God.

Jonah took a ship at sea, a violent storm came, so the sailors tossed Jonah, and he was swallowed by a huge fish.

For 72 hours, Jonah cried to God from that fish, then the fish spit Jonah out on dry land.

Jonah then, unbelievably, became angry at God for being merciful.

You see, Jonah would have been happier to “Nuke the Ninevites.”

But the story ends with God saying, “Should I not have concern for the great city of Nineveh?”

This is our task today.

To have concern for all the great cities of people, no matter their race or heritage,

“To act justly and to love mercy, and to walk humbly with our God.”

This 1:50 min video is a shout out to SAT-7's ministry partners, thanking them for their faithful and generous support.

This blog may be reproduced in whole or in part with a full attribution statement. Contact Rex or read more commentary on current issues and events at www.rexmrogers.com Follow him at www.linkedin.com/in/rexmrogers.

This 1:47 min video atop beautiful Mt Nebo in Jordan where Moses viewed the Promise Land is a good place to consider Moses passing the baton to Joshua, and then Ms. Rita El-Mounayer becoming the new SAT-7 International CEO, April 2019. We're now just a couple of weeks away from the first anniversary of this event and she is, like the rest of us, in the midst of the major leadership challenge and opportunity presented by the pandemic.

*This video may be reproduced in whole or in part with a full attribution statement. Contact Dr. Rogers at www.rexmrogers.com/. Follow at www.linkedin.com/in/rexmrogers.


A 2:10 min video in which I use the occasion of an upcoming trip to Lebanon - actually I'm departing today - to reflect upon the privilege of serving in missions for the past ten years.

*This video may be reproduced in whole or in part with a full attribution statement. Contact me or read more commentary on current issues and events at www.rexmrogers.com/, or connect with me at www.linkedin.com/in/rexmrogers. 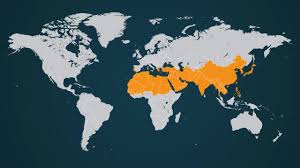