This Dangerous Book By Steve and Jackie Green with Bill High 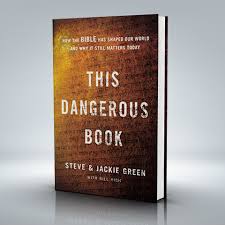 Steve and Jackie Green, part of the Hobby Lobby family and the founding family of the Museum of the Bible in Washington, DC, write about the Bible—it’s claims to truth as the inspired Word of God, its content, and its impact. Released by Zondervan, 2017, with National Christian Foundation Heartland CEO Bill High, “This Dangerous Book: How the Bible Has Shaped Our World And Why It Still Matters Today” makes the statement early in the book, “Like it or not, the Bible simply cannot be ignored.”

“The Bible,” the authors note, “is more than an ancient artifact; its voice possesses the power to shape the world for good.”

The book is part anecdotes and memories of God’s work in Steve’s and Jackie’s life, part narrative describing how and why the family began collecting biblical artifacts, their amazement at how many such artifacts exist, and details about how the idea for a world class Museum of the Bible (MOTB) came about. MOTB opened in Washington, DC, November 17, 2017.

With well over 5 billion printed and sold, the Bible is by far the best-selling book in world history. It’s been translated into more languages than any book, ever. With the YouVersion app, a Bible reading and onlinw download and mobile platform available on smart phones, the Bible is accessible worldwide to even more millions via 1492 Bible versions in 1074 languages. Other Bible apps like Bible.Is are also now available.

The authors note that the Bible is honest with its heroes, sharing both their accomplishments in the Lord’s service and their failures and sin as human beings. No one, they note, is fully good, or ever has been except Jesus Christ.

While the writers don’t make this observation, it’s worth noting that this sort of “warts and all” honesty is decidedly different from what we experience today re many celebrities, political and business leaders, et al. Too often we’re given a sanitized, unreal version of these peoples’ lives, all with the purpose of advancing them or whoever is supporting them.

The Greens and High are Bible-believers. They say the Bible presents the grand narrative of God’s rescue mission to the world. They believe the principles of the Bible can be applied by anyone, not just Christians, and that the Bible offers what might be called universal values, applicable by anyone anywhere. But they make very clear the MOTB—one floor historical overview, one floor impact, one floor stories of the Bible—is not about proselytizing or evangelizing. It’s not about presenting only an Evangelical interpretation but includes Catholicism, Judaism, and more. Rather, MOTB is about inviting people to consider the Book, to interact with its content and decide for themselves its merit.

For example, regarding Creation, which Christians and others debate in terms of time, God’s work, and more, is presented as the Bible presents it, “In the beginning God created." But MOTB does not take a position on when God created.

The MOTB’s founding family, the Greens, as explained in this book, want to present the facts about the Bible’s history, content, and impact. They want others to explore and to learn.

“When we follow the principles found in the Bible, our lives will look different. Maybe even counter-cultural.”  Following the Bible’s principles changes a person’s life, so there’s an element of risk, what the authors call “dangerous.” Some have pursued their commitment to the point of martyrdom.

In God’s providence, the Bible has made an impact in the world and upon Western civilization in particular, like no other book or philosophy. It is significant and important, whether or not people believe its words.

“This Dangerous Book” is an interesting and informative read.